In this series of articles, Steve McGhee takes a look at some of the programmes issued covering matches between Derby and those who, back in 1888, along with the Rams, were founder members of the Football League.

The spotlight now falls upon the country’s oldest professional club – Notts County. Although the two clubs have met over 60 times on league or cup business down the years, two thirds of these took place between 1888 and 1923 and were, accordingly, programme-less. So, let’s start with the wartime years:

In November 1944, the Rams travelled to Meadow Lane to take on a struggling Notts team who had won only once in the first ten games of this Football League (North) season. With 6 wins to their name so far, Derby would have been strong favourites to win and, courtesy of a Peter Doherty hat-trick and a goal from Dally Duncan, did so 4-1 in front of a crowd of 10,300. 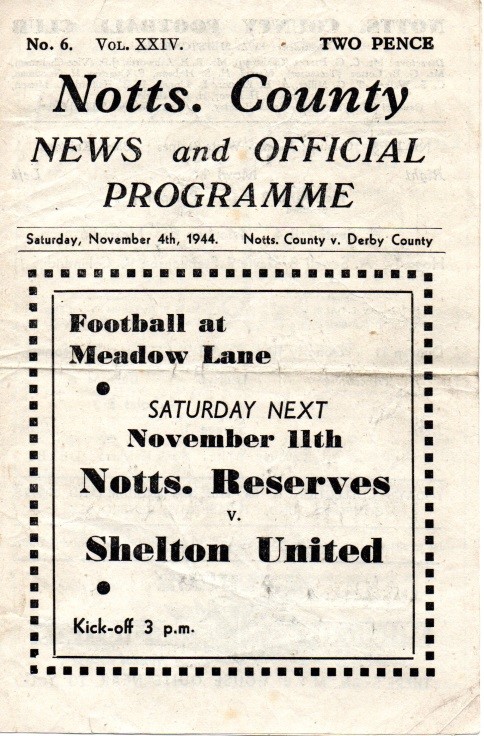 For the match, a basic 4 page programme costing 2d was produced. Without any editorial content, page 2 contained the lineups, page 3 was advertising and the back page had fixtures for the clubs first and reserve teams. At half time, there was to be a collection for the “Nottingham and Notts Comforts Fund” – I wonder what that was for? The more pedantic amongst us will notice the inclusion of the full stop after the word “Notts” in the club name – something replicated throughout the programme. Though still valid, today’s media omit this completely!

A week later saw the return clash between the two sides at the Baseball Ground. 12,000 were in attendance to see a comprehensive 6-3 Rams win – two goals each from Jock Smith (an Aberdeen player making a “wartime loan” appearance for Derby), Raich Carter and Peter Doherty lifting them to 4th place in the table. Of course, the club would eventually go on to win this title and the editorial notes on page two of the four page 2d programme are certainly optimistic in nature. Indeed, the Rams would go on to win their next 6 games after this one. 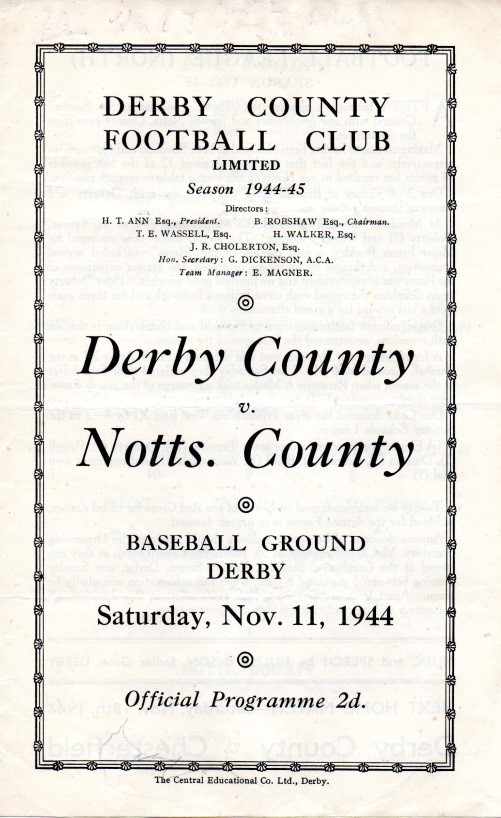 There was no advertising present in the programme but there was an appeal on behalf of the Red Cross for blood donors – interested persons were asked to attend the Greyhound Stadium in Vernon Street between 5pm and 8pm on any Sunday where they would be reminded what “a great service they would be doing the nation”. How could one refuse?

After almost 9 years without playing one another, the advent of floodlights brought the two clubs together twice in a matter of seven days. On March 16th, Notts were invited to the Baseball Ground to play the inaugural match under the new floodlights which, having been planned for some 18 months, were installed by local company W.E.Webb of Osmaston Road.

The distinctive front cover would be used on a number of occasions over the next 4 years for floodlit matches but this was its debut. The 8 page programme, costing 3d, gives full details on how and why the lighting was installed as well as a full page Notts County team photograph and details of the County players – with special emphasis on ex-Rams Leon Leuty and Frank Broome. Excellent value overall. The game was won 3-0 by Derby, Jack Parry netting twice (one a penalty) and Don Hazledine the other. If anyone knows the attendance at this game, please let me know.

A week later, then, it was the Rams who travelled to Meadow Lane to play what the programme heralded as “the first time that Nottingham fans have seen football played under artificial lights in their own city”.

For the match, Notts issued a standard 16 page programme though there is plenty to read on the subject of floodlights including the fact that the club’s directors had travelled as far as Paris before deciding what design to use. The club are also admirably up-front in admitting that installing floodlights “is primarily a business proposition” and that they hoped to attract larger crowds for evening matches as “practically everyone is free in an evening”!! Yes, those halcyon pre-television days….20,000 were in attendance to witness Hugh MacLaren net the Rams’ goal in a 1-1 draw.

1961/62 saw the Football League Cup, and all its attendant teething troubles, go into its second season and the draw for the first round pitted the two clubs together in a tie to be played at Meadow Lane. By now, Notts were in the Third Division and Derby a division above. Notts had also drawn their previous two games by the score of 2-2 so the final score of 2-2 here probably came as no surprise. Barry Hutchinson and Ian Hall (also a professional cricketer with Derbyshire) were on target for the Rams in front of a crowd of 14,654.

No penalty shoot-outs back then so, two weeks later, it was back to the Baseball Ground for a replay which Derby won 3-2 and so qualified to play Portsmouth in the next round. The early 60s saw a number of clubs, Notts amongst them, opt for a pocket-sized match programme which, though easy to carry around and read, is also devoid of any match information on the cover. As can be seen, this was also Notts County’s centenary year, the cover design reflecting this. Plenty to read within its 20 pages including a fairly candid criticism of the fact that the club weren’t permitted, under Football League rules, to reduce admission prices for pensioners. There is also an advertisement for “sherry from sunny Spain” – which makes a change from the usual brewers ads!

On April 24th 1969, a testimonial match was held at Meadow Lane for Alex Gibson who was in his 11th season at the club.  The testimonial committee arranged for a match between a Notts County/Nottm Forest team of the past and a Notts County/Derby team of the present. Interesting lineups – Dave Mackay, Roy McFarland, John Robson, Alan Hinton and Kevin Hector had agreed to play for the “present” team whereas the “past” XI included not just future Rams manager Colin Addison but also England cricketer Freddie Trueman! 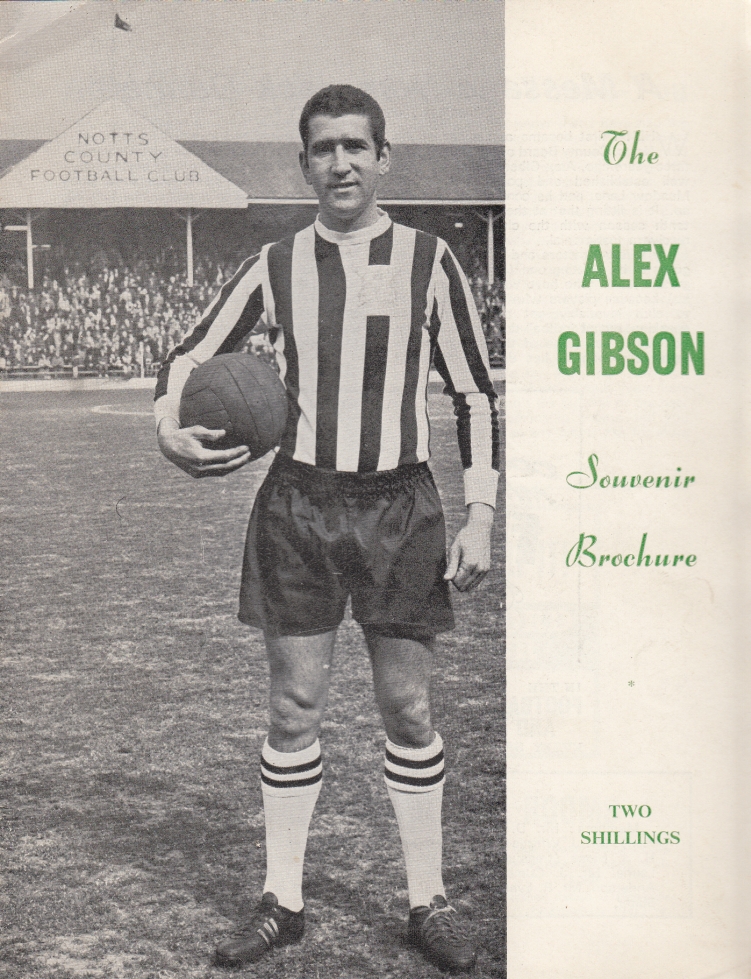 For the match, a 12 page “souvenir brochure” costing two shillings was issued. Though many testimonial programmes can be fairly bland, self-congratulatory affairs, this one is rather different in that it details fully Gibson’s hard road to becoming a professional footballer including time spent down the mine in Ayrshire. How many of today’s young pro’s would get their hands dirty digging coal?!

His foreword to the programme advises young players to “listen, learn and don’t think you know it all”. Words of wisdom even more applicable now than back then. This is a fascinating read from cover to cover concerning a “no frills” footballer and, though the Derby connection is, arguably, tenuous, I still class it as a collectable for the club pertaining to the 68/9 season.

Perhaps Gibson didn’t realise it at the time but he had already played his last match for the club at this point – during the summer he accepted an offer to join Boston United where he stayed until the end of the 1971/72 season. Upon retirement in 1973, Gibson worked in a fruit market in Nottingham and died in November 2003 at the comparatively young age of 64.

This article was first printed in issue 6 of Derby County Memories (September 2014). If you enjoyed reading it, why not buy copies of the magazine? See the About section for further details.

Great news ! The only book covering the full history of the colours of the Rams is now available in hardback, any Derby County fan who doesn’t own a copy then get one, full of facts and interesting details from 1884 till now! @dcfccollection @DCFCEst1884
https://www.amazon.co.uk/dp/1727616618

Prints of @StevenDerbyArt great BBG paintings are now available to purchase directly from this link !

A sad day for Derby County